First away game for the season and Hahndorf started strong with Miles Hennessey bringing it down for an early attempt at goal. Shortly after, Harris Parkyn drove forward and sent the ball sailing past Woodside’s keeper. The smiles across the pitch showed the joy and excitement at the first goal for the season!

Woodside fought back, but Amelia Ramsey defended the ball spectacularly sending it back down Hahndorf’s end - resulting in a great goal by Hennessey. Hahndorf’s offence was strong, keeping the ball in the forward half with Michael Griggs pulling off a great cross that was saved by the Woodside keeper.

Kealan Atkinson played some solid defence, pushing the ball forward to Charlie Roeszler who brought it down the pitch and passed off to Hennessey for another goal! Woodside brought the ball back down for a kick at goal with a great save by Hahndorf goalie Hamish Glynn. Woodside keeper pulled off some great saves too, but Eric Jager and Angus Clifton prevented Woodside bringing it too far into their forward half.

Glynn came out strong in the second half after a quiet time in goals, with a few great runs down the pitch getting it close to Hahndorf’s goals. Griggs stopped the ball as Woodside brought it back, did a big kick and followed it down to score. After some more tousles in the mid-pitch, Hennessey did an amazing job kicking it into the goal from the corner of the box. Woodside’s keeper did some great saves, not letting any further attempts get through.

Both teams did a great job and showed good sportsmanship throughout the game. 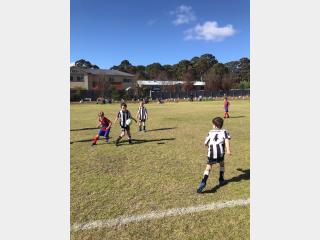