The under 8 round 5 clash between Hahndorf and Bridgewater saw both teams play with great teamwork and energy on a crisp sunny morning. Hahndorf won the toss with Joshua Blain kicking off the game. The Bridgewater Primary School soccer pitch was a perfect backdrop for teams to show their progressing skills. Oliver Knight, Goal Keeper for the first half, and Violet Mitchell defended the many attempts at goal, keeping Bridgewater scoreless.

The play was controlled by good team work with Carter Hartley passing the ball with accuracy which led to Josh Pettitt scoring the first goal.Blain and Soren Mickan ran hard to push the ball forward with Blain kicking the next goal. Mitchell and Levi Neumann showed great courage stopping the Bridgewater advance and cleared the ball to Owen Hoyle who kicked a great goal. Mickan drove the ball down the centre of the pitch, passing the ball through a tight window kicking another quick goal for Hahndorf.

Great teamwork, encouragement from all players saw more goals from Pettitt and Knight. At full time both teams gave their all, and the spectators were provided with an enjoyable game played with enthusiasm. 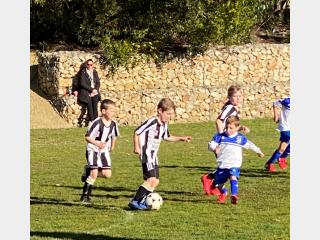