On a spring like day Woodside Warriors Blue travelled to Bradbury to tackle the top of the ladder Stirling Districts White. With many spectators from both sides lapping up the sunshine this clash was always going to be entertaining. The game started with tight tussles in the middle with M.Olssen shutting down any gaps between Woodside defense and midfield. From this position little got past him, however when it did M.Davis on the left and the combo of M.Burroughes, J.Lunnon and O.Boerth swept it up. It was from one of these clean ups that M.Olssen played a deft thru-ball to E.Moylan who ran like the wind and converted his first goal of the season against the run of play.

It wasn't long before Stirling who were submitting excellent pressure on Woodside's defense and a Stirling goal would soon come. After only 8 minutes from the first goal of the match, Stirling’s J.Hollington levelled the score after some fine attacking play from his team. For the rest of the half the game swung to and fro with Woodside capitalising on two counter attacks with R.Sutton firing 2 shots into the back of the net within 10 minutes thanks to great interacting play with W.Limbert and S.Cotton, so at half time the score sat at  3-1 in Woodsides favor.

With a great chat at halftime and a few positional changes, Woodside did not want to let this one slip. This time the center of the field came more in use with J.Mewett running down the wing like "the Flash" and P.Thomas running rings around her marker in the box. D.Silvestri was being fed great through balls from S.Cotton and R.Sutton and it looked like it was time for the Blues top scorer to again get on the scoresheet.

With persistence comes reward and after a few blocked attempts D.Silvestri found the back of the Stirling net, 4-1.

For the next 10 minutes Stirling threw everything at the Woodside's team with attack after attack and many shots being thwarted thanks to Woodside's  B.Bevan in goal and the great work of M.Davis, J.Lunnon, W.Limbert and O.Boerth in defense made it very hard for Stirling to gain an edge

All players worked hard today from both teams, as the season progresses the improving skillsets of the U12's is evident and it’s great to see team camaraderie towards each other and their opponents. Another fine match on a fine winter’s day, end score Woodside Blues 4 Stirling Districts White 1 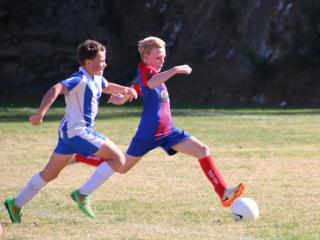 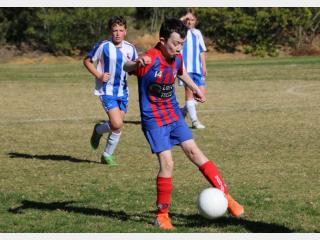 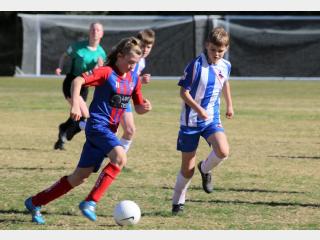 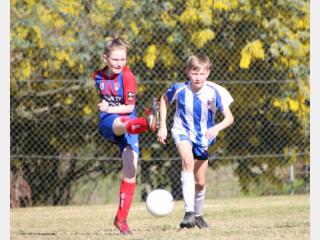 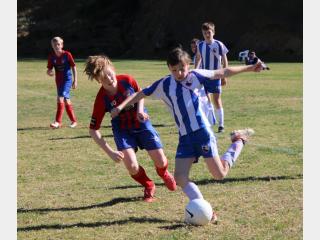