Under 9 Strathalbyn impressed early with an intimidating warmup in the unusual sunshine of Bridgewater.

Strath looked a slick outfit but it was Bridgewater who had the early possession.

The red defence was Iron Curtain like with the blue and whites unable to penetrate with a goal.

Hugo for Bridgewater looked hungry and began peppering the goals reminiscent of a sandwich artist keen for a spicy roll.

The game was paused for a moment as the ref checked the goalkeeper wasn't Mat Ryan. It wasn't, he was just having a blinder between the sticks.

Bridgewater kept pushing and finally wore the goalkeeper out with Nathan slotting one home just before half time.

The second half saw Strath resolute and ready to respond to the goal.

They pushed forward but met a mighty defence with Henry, Ethan and Paige standing tall and denying entry to dangerous areas.

Bridgewater continued to counter and were rewarded as Nathan slotted home another goal.

A ripper game as the round ball game returned to Bridgewater for the first time in years. 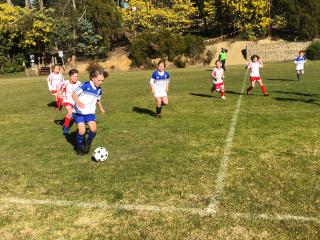 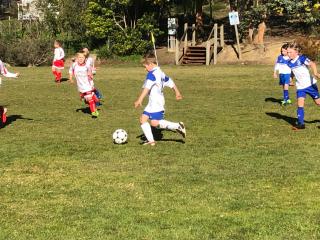