A beautiful sunny morning for the start of the season as a bunch of excited and nervous players took the pitch. Woodside came out strong and Hahndorf defence had their work cut out with Samuel Gardner and Eric Jager supporting Angus Clifton in goals. After sending it back down the pitch several times and a few great saves from Clifton, Woodside managed to sneak one through.

Fighting back in the forward half Miles Hennessey pulled out some fancy footwork to get past his opponents and a great pass from Michael Griggs brought the ball down close to Hahndorf’s goal. Amelia Ramsey fought hard with Griggs and Hennessey, but Woodside defence did a great job stopping the attempt on goal and bringing the ball back to their end with a big kick sending it past the keeper.

Harris Parkyn had a great run down the pitch, bringing the ball right up and putting his body on the line as he took a tumble trying to get through the Woodside players. As Woodside brought the ball to their end Charlie Roeszler did a great job stopping them getting too close to the goal and pushing it back towards mid-pitch before the whistle blew for half time.

Hahndorf fought hard in the second half with Kealan Atkinson chasing down the ball with Clifton. Griggs did some fantastic saves as goalie when the defenders were unable to keep the ball away. Unfortunately, Woodside offence were too strong and snuck it through the goals again.

Both teams did a great job – especially considering it was the first game for many of the Hahndorf players! 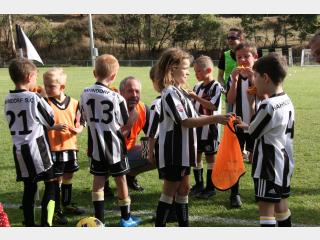