The U9 match against Mt Barker Red began on a boggy pitch after the technicalities of "rock, paper, scissors" resulted in Mt Barker Red taking the kick off.

The ball was swiftly put into Hahndorf's offensive end with Rowan Gilroy attacking the ball and allowing Thomas Gould his first attempt at goal.  Mt Barker's goalie kept their eye on the ball which resulted in a good save.  Oliver Knight and Soren Mickan attacked well in the mid field during the first half.

Owen Hoyle stepped in as Hahndorf's goalie for the second half, allowing Levi Neumann with fresh legs to run through the middle and have a shot for goal from a free kick.

Good drive by Tyson Bancroft and Hugo Curtis, allowing the ball to be passed around.  Good game to all players on a wintry day in Hahndorf. 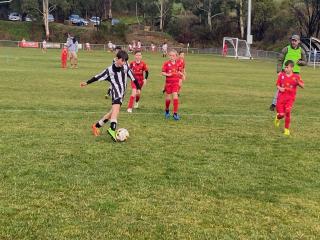 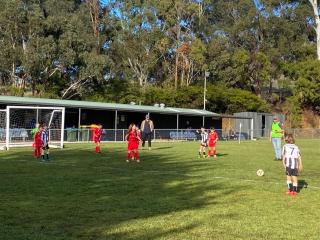