After a 5 week hiatus due to a combination of holidays, wet weather and lockdowns, Stirling United returned to the field against Murray Bridge on a fine Saturday morning, with a hint of spring in the air, and jackets were removed early in the warm morning sunshine.

Despite the extended break, it was Stirling who came out on top early, with a number of opportunities in the opening minutes giving confidence to the away side. However despite the chances being created, none were able to find the back of the net.

The limited opportunities that Murray Bridge had were being repelled by the ever reliable Kye McDonald, ably backed up by Charlotte Miller, Oliver Turczynowicz and Matthew Silcock.

With Edward Mato taking the field for Murray Bridge at the mid point of the first half, there were a few more chances for Murray Bridge but they didn’t amount to anything significant before the break. Despite the teams being locked together at 0-0, Stirling went into the break brimming with confidence after a dominant 40 minutes.

This confidence was quickly broken when Stirling were caught napping by Mato, who made a typically blistering run down the left hand side before spectacularly launching from the corner of the box, over the top of the returning Lachlan Stein in goal, into the far side netting to give Murray Bridge the lead.

From there Stirling mounted a spirited challenge in an attempt to level the scores, with numerous shots going over, into the posts or ruled offside. Murray Bridge threatened at times, but with the number of chances created, Stirling should have at least evened up the scoring if not taken the points, but as has been the pattern this season, play after play of quality build up did not result in that crucial finish on the scoreboard. 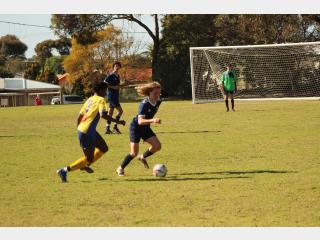