Round 3 kicked off in good conditions, with Stirling United heading down the hill at Pine Ave. Through the first 30 minutes or so, Stirling were applying great pressure to Hahndorf, and looked most likely to open the scoring with limited chances at the other end. Hahndorf however defended stoutly, and any good chances were tidied up by the backline.

The crowd sensed a slight change in momentum, with Kane Gibbs having the first real chance for Hahndorf one on one with Stirling keeper Lachlan Stein but sending his shot past the left hand post. When Gibbs had another shot moments later, it was only a great save from Stein that prevented Hahndorf taking the lead.

Stirling weren’t so lucky a third time, when another long ball found Kyle Fenlon free and this time the ball found the back of the net, seeing Hahndorf head to half time with a 1-0 lead.

After the break, Hahndorf immediately took charge of the game, thanks to a series of long balls down the hill that allowed first Gibbs, and then Fenlon twice, to have one on one opportunities with Stein in goal. Despite some valiant attempts from Stein, all three were scored, effectively closing out the game.

A shellshocked Stirling managed to contain things after that, and did have some chances to get one or two back, but in the end Hahndorf ran out comfortable winners 4-0. 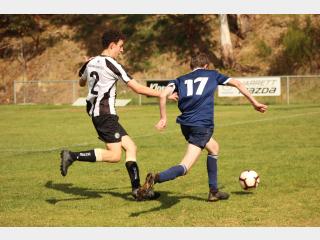 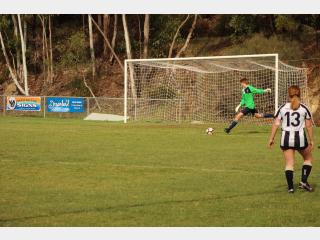 Lachlan Stein about to send the ball downfield for Stirling
Photographer: Bruce Harris