On a morning where it felt like spring was on its way, Stirling United took on newcomers BHS Forest in the early game at Anembo Park. Stirling United started strongly, but against the run of play, John Doyle for BHS Forest opened the scoring with a nice solo effort. It took till the 18 minute mark for Stirling United to equalise with a strike from Toby Leigh following up after an initial save from the keeper. Just two minutes later, Henry Monaghan received from a throw in, cut inside and doubled the score for Stirling. As the half continued, Stirling took further control of the match, and a superb assist from Araby Phelan saw Monaghan with a brace before halftime.

Early in the second half, Yuto Okada went on a solo run down the left hand side, and smoothly rolled the ball into the net. At that point it appeared Stirling had the game in their keeping. BHS Forest had other ideas and continued to launch long balls over a Stirling defence that had lost their shape, and Sam Hill capitalised for a brace of his own, bringing Forest right back into the match.

In the final 10 minutes, with the game on the line, Stirling got their mojo back and put together a classy team goal that ended with Phelan finding the back of the net and giving Stirling some breathing space. A late goal from long range to Nik Smith, returning after an extended break through injury completed the scoring, leaving Stirling the victors over a very competitive BHS Forest. 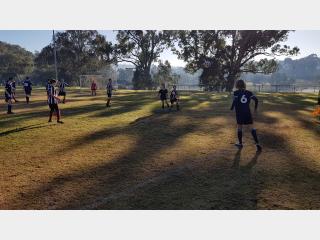 Ky Henry releases the throw in to Henry Monaghan in the early game at Anembo Park
Photographer: Bruce Harris