The heavy rain of the past week saw this weeks fixture moved from a water-logged Heathfield High School oval to Woodside to allow the game to proceed. There was definitely the threat of rain but a couple of light showers during the game didn’t dampen either teams spirit.

Both teams started positively, with defences holding firm and no really clear chances at either end. A corner for Woodside saw a goal mouth skirmish and the ball somewhat fortunately finding the back of the net from Izeyah Raymond. Almost immediately, Woodside got another chance, with a through ball finding Lachlan Mowbray unmarked and one on one with Henry Monaghan in goal. Mowbray calmly placed the ball in the bottom right corner to extend the lead to 2 leading into half time.

The game started to open up after the break, with both sides creating chances. Stirling were stringing multiple passes together to move the ball down field but couldn’t find the back of the net, taking shots from distance. At the other end, Woodside continued to threaten, with a number of great chances either missing wide or over the top. Eventually, Mowbray extended the lead, with another quality finish.

Despite the deficit, Stirling kept pushing forward, trying to get back into the game, and creating a number of opportunities. With Monaghan released from goal keeper duties for the second half, many of these chances were due to his creativity, including a delightful backheel which saw Tom Harris in the clear but his shot to the near post was comfortably saved by the keeper. Another great piece of team play saw Stirling finally on the scoreboard, when Araby Phelan released Ky Henry on the right wing, whose cross was volleyed superbly by Monaghan into the back of the net.

Two mid-season recruits stood out for Stirling. Down back, Doni Savva was dominant, controlling the right side of the Woodside attack through a combination of great reading of the play and strong tackling. Meanwhile, Lottie Miller in midfield was creative throughout, demonstrating her agility and skill getting through some tricky situations.

Whilst Woodside took the points on the day, Stirling showed that with a few recent additions to the squad, they won’t be able to be taken lightly in the second half of the season. 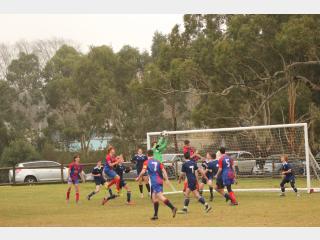 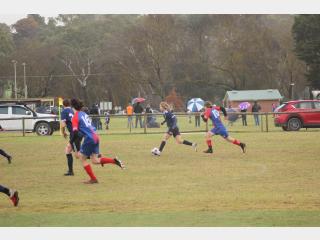