Pre-game rain dampened the pitch but not the contest which started in a lively manner. Both sides made early build-ups, but it was the Torrens Warriors (TW) who netted early when their attackers evaded a charge from SDFC’s keeper and then the arriving defenders to shoot - only to have the ball caught on the line in a lunging dive by the now recovered SDFC’s keeper En Ueda whose momentum, sliding on the wet pitch, unfortunately carried her and the ball over. The goal enlivened the SDFC attack particularly Ruby Tully which, despite running into a slight headwind, made many positive entries to TW’s penalty area only to see them repelled by steely defence – including Eviemae Kaines on loan to TW. TW gave as much as they got and launched many fast-paced attacks which saw SDFC’s defence of Nora Bijlsma, Isabelle Bailes, Auriana Healy, and Amber Abrahams breathless on more than one occasion. Defences held and TW remained 1-0 up at the break.

The second half started in a similar manner with TW netting early to go 2-0 within the first five minutes. Despite some pitched battles in midfield featuring Zora Huang, Zoe York, and Aubrey Adams, TW were equal to the task and having the momentum of the game managed to run in further goals, including one by Eviemae Kaines to be comfortable winners. Despite the final score line the half featured long durations of excellent play and displays of great football skills as each side fought valiantly for control. 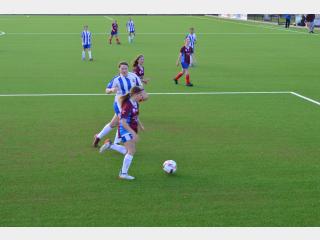 Ruby Tully and Eviemae Kaines finding themselves as opponents do battles 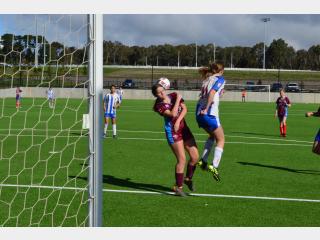 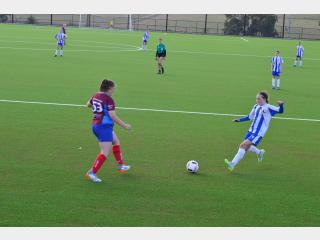 Zoe York striving for the ball 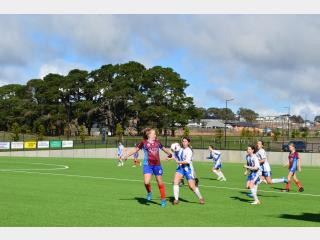 Evie Reid in another tight contest 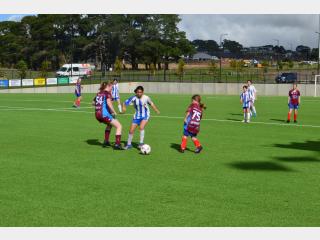 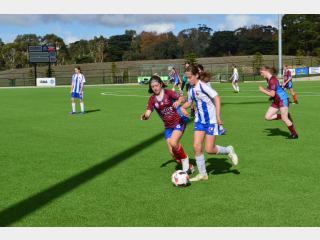