After a few games where our Warriors have left the pitch disappointed they really needed to pull a strong performance out of the bag this weekend to restore their confidence, and wow did they deliver!

The team got stuck into Stirling United straight from the kick-off, continually pressing their midfield and forwards and restricting them to a few glimpses of goal that first half keeper Leo Tucker dealt with confidently. Woodside’s possession game showed serious signs of improvement, managing some strong attacking runs and finding the midfield and forwards with their passing. As a result of this, Woodside had the ball in the net through Noah’ Paechs strong shot before half time and created a few more good opportunities.

Football is often said to be a game of two halves so it was interesting to see how United would respond after the break, but the Warriors continued their high-energy pressing game into the second half, closing Stirling down all over the pitch and gaining possession of the ball. Good forward movement again translated into scoring opportunities, with Jock Mills and Sam Balacco both managing to beat the United keeper. The only drawback of a high-energy pressing game is that the midfield begin to tire and this began to show in the latter stages of the second half with United managing to break free of the Warriors midfield and create a few scoring chances. However, second half keeper Austin Levy was up to the challenge and kept the ball out of his net.

This was a really strong performance from the whole team, led by this week’s captain Charlotte Cosgrove. All of the U9 Blue kids should be proud of themselves. We have a little way to go before achieving the coach’s vision of Total Football, but some of our work at training is beginning to pay-off. 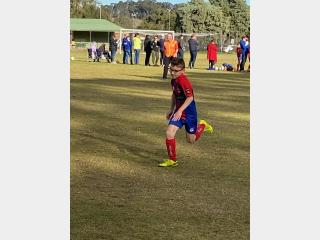 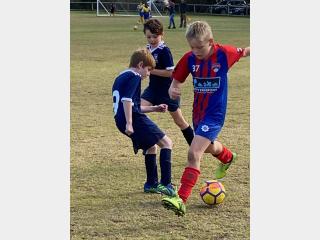 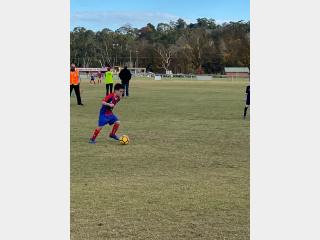