An undermanned Stirling United headed to Strathalbyn for an early start, in exceptionally warm conditions for this time of year. With only 9 players ready to take the field at the start of the game, Stirling knew that a tough day lay ahead.

Strathalbyn took an early lead via the trusty boot of Kalan Brooks in the fourth minute, and with Brooks adding another two inside the first twenty things looked bleak for the visitors. The arrival of Kye McDonald at least brought the numbers closer to even, and Stirling started to put some nice play together, without putting anything on the scoreboard. A late goal from Brooks shortly before half time saw Strathalbyn comfortably ahead 4-0 at the half.

With fatigue likely to play a factor, Stirling fans were anxious about the possibility of a complete blowout, but that wasn’t to be. Stirling held firm at the back thanks in large part to an outstanding display from Lachlan Stein in goal, and produced a number of solid chances of their own throughout the second half, ultimately unlucky not to have got a couple on the score sheet. A nil all second half was testament to Stirling’s resolve in tough conditions and will give them confidence going into subsequent encounters through the season when hopefully a full squad will be available. 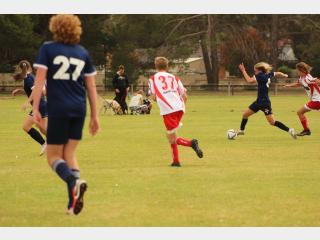 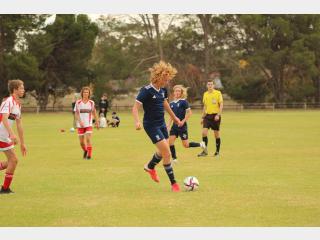 Tom Harris prepares to pass the ball to a nearby teammate
Photographer: Bruce Harris