After a week of wintry weather, the sun gods decided to smile on Adelaide Hills’ junior soccer fanatics this weekend, heaping down golden sunshine in spades. At their Fortress, it was Woodside U14 Blue hosting Torrens Valley Soccer Club. This promised to be an enthralling round of grading with both teams achieving similar results in recent weeks. And the game didn’t fail to deliver.

Both teams looked well drilled in the early encounters, maintaining impeccable structure and executing their game plans well. This saw many opportunities created by great attacking work, and an equal number of opportunities thwarted by the hard work in defence. But with such a high level of skill and team-work on display, it was inevitable that someone would find the net. It was Torrens Valley who opened the scoring, delivering a great through-ball past the high Woodside defensive line and finishing with style. But Woodside were not going to lapse in their efforts and before long, their constant forward pressure was rewarded with an indirect free kick just metres from goal. They converted this with poise and precision, burying a short pass hard into the back of the net. The rest of the first half was a see-sawing encounter and were it not for a 3 minute lapse from the Warriors, we may have found ourselves 1 – 1 at the break. But they did lapse, just fractionally standing off their opponents by a half step. And the well-drilled Torrens Valley forwards didn’t need to be asked twice, scoring not 1 but 2 goals in an unexpected flurry of activity. This left the home-crowd stunned with the visitors leading 3 – 1 at the break.

But occasionally half-time can do strange things to a game of football, and this was one of those moments. After a game that was as even as the number two in the first half, things were clearly in Woodside’s favour during the second. And while the Woodside goalie was run off his feet in the first term, he hardly touched the leather in the second. The ball seemed to be drawn to Torrens Valley’s end of the ground as if by some inexplicable force of magnetic attraction. In truth, it was a direct result of the Warriors’ increased work-rate off the ball and control of possession through clean short passes, which created a landslide of scoring opportunities. But as good as Woodside looked going forward, Torrens Valley matched them at the back. And so we witnessed an enthralling contest as Woodside created and Torrens Valley repelled. With such a territorial advantage, Woodside simply had to sneak one past the goalie, and eventually they did, hitting the back of the net to set up a nail biting finish. Time and again, the Warriors hit the Torrens Valley’s goalies hands. Time and again his hands were true. And although Woodside were still on hard-attack when the ref called an end to proceedings, it was Torrens Valley taking home the choccies with a well-earned 3 – 2 victory.

Full marks all round. A great match, played tough, and in the spirit of the game! 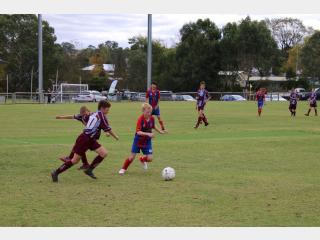