Tensions were high with anticipation in the crowd when both teams took to the pitch as the sunshine broke through the clouds. With a lot riding on this game for each team the one-minute silence to acknowledge the death of Queen Elizabeth II before the game kicked off added a respectful and sombre note. Woodside made an early attempt at a goal kick within the first two minutes of the game that was well prevented by Tom Boekel. Jesse Powell and Lance Pope worked hard at moving the ball upfield and the pressure was high from the start, with the crowd well aware this was going to be an intense game. Alexander Romaldi displayed excellent footwork throughout the game and Luca Cannavo put his whole body into action to defend against the opposition. Angus Mifsud kept pressure on the opposition in defence with great support from Toby Thomas and Oscar Johnson. With Woodside keeping pressure on the goal square, Boekel was put to the test and demonstrated repeatedly why he is such a valued goalkeeper for the team. Thomas was observed to get his whole body involved in his efforts to keep the ball in high pressure play.

While Romaldi was seen everywhere around the pitch keeping the pressure on the opposition, initial attempts by Powell at goals missed the mark by going a little high or slightly wide. The energy of both teams was palpable as they both sought to achieve that first goal. Great passing was displayed between Cannavo, Mitch Stribley, Thomas, and Pope and at the 20-minute mark with a great assist by Romaldi, Powell kicked the first goal of the game. Liam Sickerdick provided great assist work to his teammates and the ball kept moving up and down the pitch, with the opposition keen to respond with their own goal. Thomas displayed amazing ball skills that saw him kick a ball between an opposing players’ legs before taking it further up the pitch. A ball was lost to the roof of the clubroom and a new ball was quickly brought into play. Both teams continued to display excellent efforts and well-developed skills on the pitch before Woodside equalised the game with their first goal just after the 34-minute mark. This was answered shortly after by Hahndorf with an awesome header in front of the goal by Thomas assisted by Powell. Will Viller provided an impressive assist to Powell that ended a little wide in his goal attempt and the half time whistle went with Hahndorf in the lead at 2 goals to 1.

When play resumed for the second half the tensions were raising, and the onlookers were on tenterhooks. Rhys Davies was making amazing efforts in defence and provided great assistance to Boekel, Mifsud and Johnson at thwarting the oppositions efforts at goals. With an aggressive tackle, Stribley had to leave the pitch after his head connected with the fencing causing damage to his right ear. Five minutes into the second half, Powell scored his second goal, and the Hahndorf parents breathed a temporary sigh of relief. Cannavo worked hard at moving the ball down the pitch, while Mifsud was repeatedly called upon in defence. Subsequent efforts by Pope and Powell at goals missed their mark, going wide or too high and spectators could see the energy of the players from both sides beginning to flag. Boekel performed amazingly in goals and prevented several attempts at reaching their mark. A woodside player received a yellow card after an aggressive tackle resulted in Pope flying into a rolling tumble. The resulting free kick taken by Powell glanced off Pope’s head to hit the goal sidebar. Cameron Norris displayed solid efforts at assisting the team each time he was subbed on, while also supporting his brother, Jensen Norris with play.

Davies and Johnson were put to the test in defence with Woodside fighting hard and the skill development that both teams have made over the season were evident. Another ball was lost to the bushes and the game continued when a new ball was thrown in. Woodside’s efforts at goals finally paid off and the pressure kept escalating. Johnson, Sickerdick and Mifsud kept making solid efforts at clearing the ball away from the goal square, but Woodside eventually equalised the game at the 72-minute mark. Thomas and Powell worked well together at creating further opportunities for Hahndorf to seek additional goals. Woodside responded with their fourth goal with only 3 minutes left in play. This was an amazing game to watch and both teams kept pushing till the final whistle with the result Woodside 4, Hahndorf 3. Great efforts by all and an incredibly tense game for the teams and their spectators. 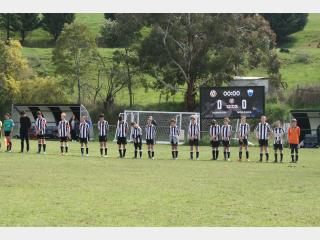 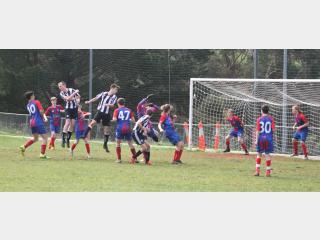 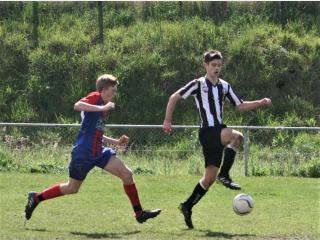 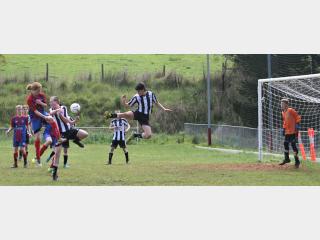 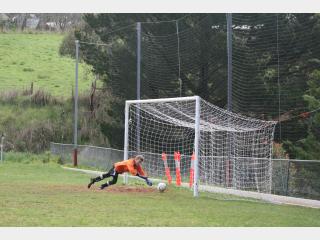 Thomas Boekel in full stretch to make one of his many spectacular saves
Photographer: Melissa Boekel