A bright but bitingly brisk morning at Mount Barker&#39;s outstanding new sporting facility met players,
parents and officials. An opportunity for all players to display their skills and touch on a perfectly flat
pitch, devoid of mud, potholes, slopes and covered cricket pitches.
All players, coaches and officials lined up and walked onto the pitch in a show of solidarity and
respect for each other. There were claps of acknowledgment from supporters, friends and family in
the stands.
The players took their positions on the pitch ready for the game to begin.
It was a truly David versus Goliath match, with Stirling United still reeling from a torrid match last
week and the loss of players through injury, only just being able to field a team after a frenetic
recruitment drive. Their strikers were bullish and poised to have a good day on the pitch.
What Stirling United lacked in size was more than made up for in their deft touch and skill.
The match was free flowing but rugged, with both sides making forays into each other’s territory at
will.
Defence, defence, defence! The defenders on both sides were truly the heroes of the day with the
midfielders and strikers having to fight like tigers for every inch of pitch and the right to strike on
goal.
The breakthrough goal came late in the first half with Kalan Brooks from the strikers able to finally
break through the stalemate and get the ball in the net with the accompanying cheers from the
Strikers faithful in the stands.
As the ball was returned to the centre for kick off there was a still silence over the pitch with only
the crackling of the corner flag in the wind audible – The bowed heads of the United players denoted
a sense dread of a possible imminent turkey shoot and routing.
The second half began with controversy as United’s stand-in goalie was unable to take the pitch,
with none of the United players wanting to take on the uncovered mantle of goalie and sideways
glances by all players, it took a bit of a hero to raise their hand and step up. Not only did Doni Savva
step up, his keeping kept United in the game.
The Strath Strikers were patient but edgy for the second half to begin and came out hot.
The second half began in earnest with both sides on the ball in equal amounts, unfortunately for
United, fate would have it that determination was defined as a penalty and Riley Brooks stood in
front of goals and punched the ball in to go 2 up.
United weathered the storm and focussed on the basics to get a pass through to Henry Monaghan,
who with an heir of calm and poise scored the first for United in the sixth minute of the second half.
The Strath Strikers defence continued to hold firm and with the forward skills of Kalan Brooks and
Ned Hardy another Strikers goal looked imminent.
Against the flow and only five minutes after the last United goal, a mid-field pass from returning
player Kyle Anderson put Araby Phelan in a position to goal, he took his chance and scored United’s
second.

Both teams returned to the middle, steel faced and eager for glory, all players on the pitch lifted and
gave their all for the remaining game time.

Both teams had great opportunities to score from corners, but neither team could negotiate the
steadfast defence of each other&#39;s defenders.
The game continued on with a good mix of skill and rough determination. The wind picked up and
had a moderate impact on the quality of the game, but overall, it continued to showcase the skills of
the players in the league.
Both sides had standout players on the pitch. From Michael Savva the small but lightning fast and
skilled winger who showed that you don’t have to be big to have an impact on a game to Jayme
Manfield the defender who showed that if you have heart and persist you can also have success.
Despite the competitiveness shown by all during the match it was heartening to see the great
sportsmanship and respect shown by the line-up and hand slap pass of both teams at the end. 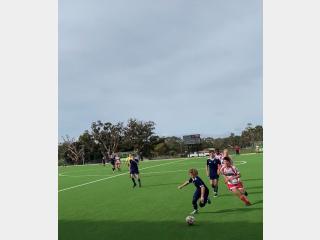 Opening of the second half on the new Mount Barker artificial turf
Photographer: Penny Bouchereau 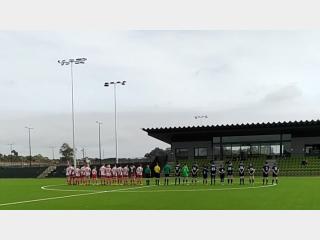 Players line up for respect round
Photographer: Fiona Phelan