It was a surprisingly sunny day, though the pitch was still muddy from the weeks rain.

Hahndorf went on the attach from the beginning.  Some great passing by them eventuated in a goal, unfortunately it was off side.

Strathalbyn did some great defending, but the goalie outshone on the day.  Saving plenty of tries by Hahndorf players, Shotton, Liddle and Gould.

After 18 minutes Strathalbyn scored a great goal, going way over the goalies head.

In the second half again Hahndorf was on the attach, A great free kick taken by Gould resulted in Hahndorf''s first goal,  After some great passing by Aylen, Romaldi scored the second goal for Hahndorf.  On the attack again Hahndorf had some shots at goals, but unfortunately the ball came off a Strathalbyn player giving Hahndorf their third goal.

It was a great game, with lots of excitement for the crowd. 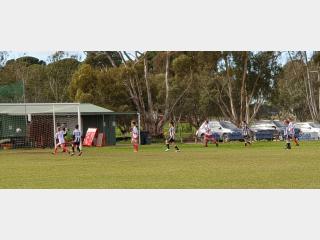