A chilly, but beautifully sunny winters morning greeted players and spectators at Anembo Oval to witness Mount Barker Blue take on Hahnford White. Mount Barker were coming of a loss the previous week and were keen to get back into the winners circle. Hahndorf White were also coming of a loss to their sister team, Hahndorf Black. Both teams were itching for a victory!

The game started with Mount Barker kicking off and immediately penetrating deep into the Hahndorf half. A good move by Mount Barker mid-fielder Rupert Curran threatened but the Hahndorf defence were up to the task. Mount Barkers midfield of Remarni Puiatti, Sophia Canova, Jonty Burzacott and Rupert Curran were controlling the game and field position. This allowed Mount Barker strikers of Archer Hawkins and Liam Dunn a couple of good opportunities to open the scoring, however Hahndorfs defensive line held firm

With weight of possession and field position, it wasn't too long before some points were scored. Remarni Puiatti,  who had been pressing forward, found the back of the next with an excellent shot on goal to put Mount Barker into an early lead after only 10mins. Mount Barker now had their heads up and were continually pressing forward. Hahndorf managed a couple of piercing runs into the Mount Barker defensive line but were denied any real genuine scoring opportunities.

Mount Barker quickly gained the ascendency and moved the ball well to their outside runner Jack Pallant. Jack did well to maintain control and feed the ball into the goal square. After some scrambling by both teams, Jonty Burzacott calmed slotted the ball to a diving keeper who got his hand to the ball - only for the referee to award the goal as it had passed over the line. This was Jonty's first goal in soccer and this is always a special moment for a young player. His team mates rallied around him and made the occasion very special. His Mum was rather chuffed too!

Mount Barker now had a confident strut in their step. From the ensuing kick-off, they quickly assumed possession and moved the ball well. Centre back Colin Patterson moved forward to give Mount Barker an extra attacker and made it very difficult for Hahndorf to find any space. After a succession of passes Remarni Puiatti claimed his second goal of the match to move the score to 3 - 0 after 19 minutes. The game was now slipping away from Hahndorf

From the kickoff Hahndorf, found some pep in their step and were determined to fight. The Mount Barker backline of Jamison Henke, Colin Patterson, Henry Main and Kael Sander were now being put under some positive pressure from the Hahndorf team. After a number of corners, which were well defended, Mount Barker composed themselves and earned a goal kick. Unfortunately the goal kick found the foot of Hahndorf #9 Hayden Lien, who confidently put the ball past a diving Billie Goedecke to claim Hahndorfs first goal of the game.

Going into the half-time break Mount Barker led 3 -1 against a surging Hahndorf.

The second half started with Hahndorf determined to get early points and that, they did. 4 minutes into the half Hahndorf’s Harrison Gould claimed his teams second goal to move the score to 3 -2. Hahndorf were surging back!

Mount Barkers goal keeper, Billie Goedecke, was put under enormous pressure as Hahndorf tested his skills with numerous shots on goal. Hahndorf now had weight of possession and field position, a dangerous combination! The next 16 minutes belonged to Hahndorf as they constantly pressed forward with threatening runs. Mount Barkers wide midfielder, Sophia Canova never stopped running and often delivered promising runs down the right side of the Hahndorf defensive line. Not to be outdone, Hahndorf were nothing but persistent and at the 50th minute delivered a well-earned equalizer to #6 Jacob Gardner to level the scores at 3 -3. We now had a game on our hands!

This goal stung Mount Barker into action with the clock ticking down. They composed themselves and started to push the ball wide to their midfielders who maintained control. A good striker is one who follows the ball and is constantly hungry. This was superbly demonstrated when Mount Barker fullback, Colin Patterson, struck a thunderous shot on target, only to hit the cross-bar. Ever the hungry striker, Archer Hawkins followed the shot and deservedly claimed his first goal of the match to deliver Mount Barker a thrilling 4 -3 victory on the stroke of full time.

The Mount Barker supporters erupted! Hahndorf were despondent but gallant in defeat. Both teams had delivered a thrilling spectacle that was a real joy to watch

Next weeks game for Mount Baker is against the dangerous Woodside Red team and for Hahndorf, they will face off against Nairne 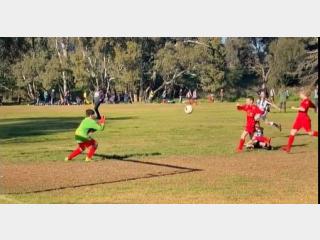 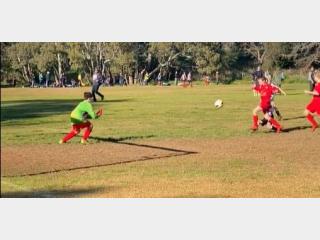 Billie Goedecke successfully parry's the ball away after a good shot on goal by the Hahndorf Black striker
Photographer: Gav Goedecke 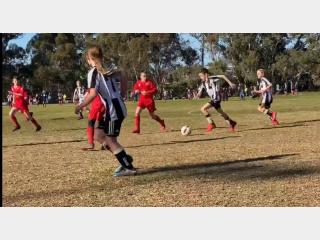 Hahndorf Black go on the attack as Mount Barkers centre back, Jamison Henke, covers in defence 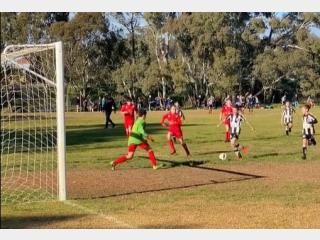