Round 5 at the Warrior’s home ground called for a glorious sunny Winter’s day. Since playing each other previously, Woodside knew they were in for a hard game but were keen to get things started. The game commenced with Woodside’s kick off moving the ball forward into their half, though it didn’t take long for Valley’s Midfield to win possession of the ball and turn the game around into their half and having a shot at goal. Woodside’s defence and goal keeper Rachel Colla were at the ready and reflected the shot, giving Valley the first corner kick of the game. Woodside’s keeper and defence were not only ready to get the ball out of the box  but to apply pressure on Valley’s forward players. Play continued in Valley’s half, as they tried to remain play back in their half however Woodside’s defence were fierce and applied the pressure. This pressure persisted throughout the game, which in turn saw Valley players having shots on goal from outside the box. Though this didn’t faze them, with their powerful shots on goal their first goal was awarded in the 19th minute by chipping over the top of the keeper from well outside the box. Woodside’s keeper, Rachel Colla was in perfect position and tried to reach for it but even with platform shoes there was no chance in touching the ball.

Torren’s Valley were hungry for another goal and continued to get into the box however Woodside’s defence were not only persistent they were smart, seeing Valley offside a number of times throughout the game. With this added pressure on Valley, Valley knew they had to play hard. And hard they did.

Half time saw Valley up three nil and straight away the pressure was on. But maybe a bit too much pressure by Woodside’s defended Sophie Urwin which in turn awarded Valley a penalty shot. Though Woodside’s keeper was raring to go and saved the ball from goal, she sure proved her keeping skills. The game continued with Woodside holding the defence and Valley powering through with their dazzling dexterous shots on goal from afar.

A huge thank you to all the supporters who came out to support the girls from the side lines as well as the referees and line men. 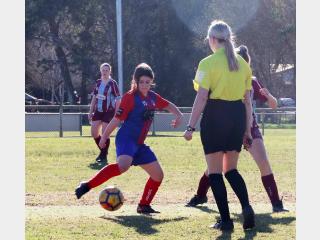 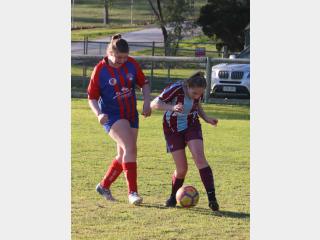 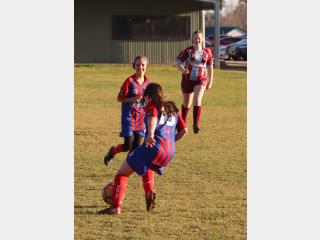