A bright morning at Strathalbyn saw second placed Stirling Districts take on first placed Torrens Valley Warriors for the third time this season. Stirling Districts usually high player numbers were significantly reduced due to injury, illness and travel, including regular coach Bill Dalton. Tim Verryt stepped up as guest coach and set the standard, telling the players not to let ladder position get into their heads and to focus on playing the game, passing and talking to their teammates.

When play commenced, Stirling Districts had 10 on the pitch to Torrens Valley Warriors 8. Initially both teams looked slow to start until Stirling Districts showed a determination to get the game properly underway. Auriana Healy’s hard work paid off when she scored the first goal at the 5 minute mark, quickly followed by Jess Verryt at 7 minutes. 10 minutes in, two more Torrens Valley Warriors took to the pitch as Lily Holland was subbed on bringing her usual tenacity. Aubrey Adams was strong on the wing and putting pressure on goal. There was a lot of passing within centre pitch which overall is a great progression although in some instances in this match it was overdone. Still, it led to Evie-Mae Kaines scoring a goal at 22 minutes. En Ueda got a bit of a workout in goal and kept the team in good stead. Going into half time, the score was Stirling Districts 3 to Torrens Valley Warriors 2.

Throughout the game, Ruby Tully and Nora Bilsjma held a strong backline and provided great leadership to the team as a whole.  Mollie Green once again showed her versatility in midfield. After being subbed on partway through the second half, Amber Abrahams’ nerves trying a new position were quickly left behind as a new confidence took over her play in midfield. We're looking forward to seeing more of this level guts and determination as the season unfolds! Jess Verryt’s tenacity shone as she went on to score her second goal at the 55 minute mark.

With full time scores at a 4 – 3 win, Coach Bill has handed over bragging rights to Coach Tim for all eternity! Well done to all the players and the camaraderie of this year's girls competition both on and off the pitch. 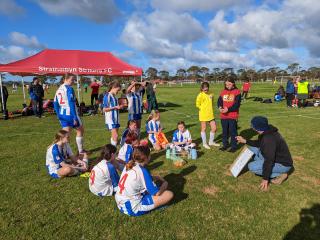