Heading out with a team consisting of just nine of their regular players the Woodside Warriors U14 Blue team always knew it was going to be a tough game.  Conditions were great, the sun was shining, and with a 12pm kick-off time at Murray Bridge it was getting a little warm.

Stand-in coach Lee Maker huddled the boys before the start, showed them their positions for the first half of the game and with some inspiring words prepped them to play some good soccer.

From the outset of the first whistle Murray Bridge Gold were on the attack, pushing hard and putting the ball forward, so that within the first minute of the game Woodside’s goalkeeper was in the action, making his first save with his boot.  This was going to be a tough half for him, who was a fill-in from the U12’s.

Somewhat unsettled Woodside’s defenders had to regroup, be on their toes and focus.

Murray Bridge’s attacking continued to be fierce. With strong legs and great footwork from their two key forwards it meant they could get away fast and have shot after shot on their goal.  Woodside’s defenders worked hard, trying all they could to keep the ball out of the goal square.  However, Woodside’s keeper was under fire, making multiple great saves, including one that required a huge leap (for his short stature) to get the tips of his fingers to the ball and deflect it over the top bar.

Looking a little dejected at half time, with a few of opportunities of their own but no goals to show for it, the Warriors sat, ate oranges and listened to their coach’s positive guidance.  A few changes were made, with a new goal-keeper, and players in alternative positions.  They walked out after the break with their heads held high and a few small objectives in mind – maintain passes between their team mates, and score one goal… and deliver they did!

The second half almost seemed like a different game to the spectators.  The ball was much more often in the Warriors attacking half.  Woodside’s attackers worked the ball through players, making switches across the pitch to mix up the play, using their own pace and strong boots to put the Murray Bridge keeper to work.  The result was not just one, but multiple goals for the Warriors.

Murray Bridge continued to answer the Warriors, and their forwards continued their strong play up the front, pushing the Woodside defenders to work harder to maintain the ball.  Woodside’s keeper, still under fire, stayed focussed- getting to the ball early and challenging the forwards to make some difficult attempts to increase their score.

The end result was clearly in Murray Bridge’s favour.  There was good sportsmanship shown on both sides, great team work from all, and after what initially looked like it would be a run-away game, a good contest ensured that both teams came away with some positives and some learning points. 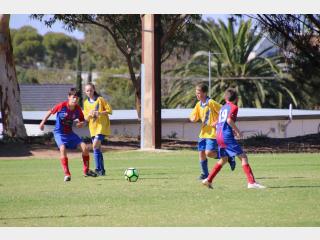