With temperatures starting to drop, an 1130 kick off was a blessing for the U17 match at Ashton Oval, with local rivals Rangers and Stirling United battling it out for the second time this season. First time round saw the teams draw 1-1, and matches between the teams over recent seasons have almost always been tight affairs, with Stirling United holding the upper hand in the head to head count.

The match started with both teams playing tight, contested football, with few chances at either end, but a good chance for Rangers was only prevented from opening the scoring by a brilliant save from Lachlan Stein in goal. Stirling started to take more control of the game from that point on, and had a number of good chances missing by small margins before a free kick taken from well beyond the D by Henry Monaghan soared over the goal keeper and into the back of the net to give Stirling a well deserved lead.

Rangers defence otherwise held strong, led by Tom Playford who was reading the play superbly and repelling attack after attack.

After half time, Stirling continued to press forward, but a counter attack from Rangers saw them draw level with a lovely finish past Stein in goal. With renewed confidence, Rangers had further opportunities, drawing another brilliant take from Stein to prevent Stirling going behind.

As the match passed the one hour mark, Stirling started to take control, and saw multiple opportunities for goals go begging with shots going over the top or wide. It seemed a matter of time before they would score, when almost out of nowhere, after a scuffle at the defensive end saw Stirling temporarily a player down, a quick long ball downfield was pounced on by the Rangers attack and score to pull ahead. Despite protestation from the Stirling players, the goal counted, leaving only minutes remaining for a late equaliser. Alas that wasn’t to be, and Rangers held on for the victory and bragging rights until the final encounter later in the season. 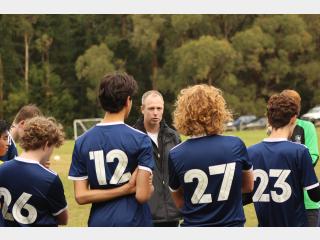 Coach Damien Sheridan instructs his players at half time of the Stirling United v Rangers Round 6 match.
Photographer: Bruce Harris 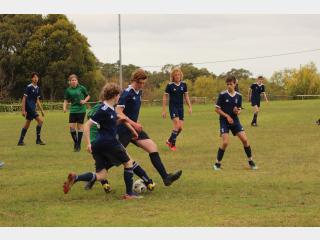