The game commenced in lovely sunshine  and no wind.

The Woodside team played a well formed game and their goalie was amazing throughout the game keeping Torrens Valley on their toes and having to really push to get goals through.

Woodside were pressuring towards Torrens Valley defence and goalie Matilda Feast to try to score and they were pushed wide away from the goal square.

Woodside keeping Torrens Valley unable to score until the 19 minute mark by Ruby Homer.  Torrens Valley were placing the ball down both sides of the pitch getting players involved and Woodside were intercepting and trying to get through the Torrens Valley defence on several occasions, however with the Torrens Valley experience this was trying at times, but have to give them credit for never giving up and continuing with their perseverance.   2nd goal was scored by Kiana Rogers placing into back corner of the goal.  Not long after Adelaide Williams scored the 3rd goal for the game.  A penalty on goal was taken by Grace Quane which was collected by the Woodside Goalie.

Woodside continued to push and pressure the Torrens Valley team,  once again the Woodside goalie protected her goals well while Torrens Valley tried to score during this half.  The Woodside defenders were all getting in there and helping out, Torrens Valley had to pass back and forth to try different ways of scoring.  There was an amazing goal by Zara Witter which went over the goalies head and into the goal.  2 more goals were scored by Elaine Miller and Amelia Williams.  The Woodside forwards caused some angst for Jamie Fahner in goals when there were a couple of attempts on goals. 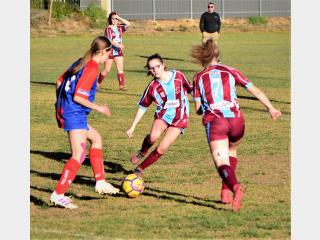 Amelia Williams coming in to take ball from Woodside player Adelaide Williams trying to help out. While Elaine Miller is shielding her eyes from the sunshine in the background.
Photographer: Andrew Miller 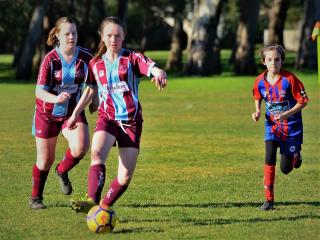 Elaine Miller getting the ball away from Woodside player.
Photographer: Andrew Miller 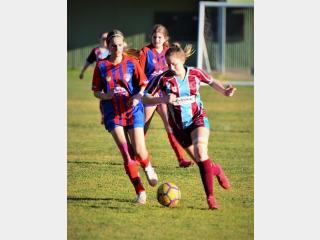 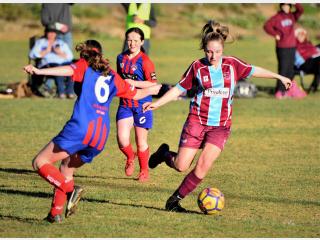