Inclement but mercifully dry skies welcomed players and spectators alike as they filed into the Warriors Fortress at Woodside Sports Reserve. The first match of the day saw Warriors U14 Blue hosting Murray Bridge Blue.

It was a chilly morning and the chill seamed to have permeated the Warriors legs as they slid sluggishly out of the blocks. There was no such trouble for the Bridge Boys (they apparently had their heaters on for the long drive up) as they sprang into action on the ref’s whistle. And it wasn’t long before they were hard on attack and threatening to ruffle the net. In the Hills Under 12 league, you can rely on the opposition missing the odd easy shot, or hesitating long enough for you to close them down. But for this years Under 14s, those days are gone... Blink and it’s all over. Bridge proved this as their striker was afforded space and time close to the onion bag. He controlled the ball, sized up his options and placed a gentle, but beautiful chip over the keeper's head. One – nil Murray Bridge. Then the penny dropped for the Warriors. It was Saturday morning, and that means soccer. Wake up. Warm up. And play! Now the game became a surging and see-sawing tussle between two evenly matched teams. Both created opportunities. Both defended doggedly. And eventually it was the Woodside striker who was served up a clean opportunity in front of goal. No hesitation from him either. He didn’t have space or time. But he didn’t need it. He controlled the ball and drove it neatly past the keeper. One all. Game On!

The second half was also an even contest. Bridge were creating a few more chances but Woodside were hanging in there, working hard to repel the omnipresent threat that challenged their nest. But it was from this threat that they were able to create. Their defence took control of the ball just outside the box and transferred possession to the mid-field. The midfielder turned to surge forward, but was met by the ever-organised Bridge defensive line. With no-one in front and no better options wide, he pushed the ball though the line, chased, and regained possession. Then a tussle began between two players who craved the ball equally. Shoulder to shoulder they fought for possession. As the ball entered the box, more yellow shirts flooded back to aid their compatriot... the goalie surged off his line with intent... the lone Warrior found a short-touch off his left, the goalie slid, the defence closed and a red right sock drove cleanly at the ball, directing it into the only open fragment of net. Warriors 2 – Bridge 1, ample time left for anything to happen.  It’s hard to say what happened in the next few minutes. But whether it was Bridge who lifted or Woodside resting on their laurels, the lads from down the river put two quick ones into the onion bag to reclaim the lead. It was devastation for the home crowd, but elation for the visitors! The clock said Woodside were still a chance, and the boys in Red and Blue agreed. They defended, rebounded, surged and strived. But Bridge had the answers and they finished the game for a well deserved 3 – 2 win. 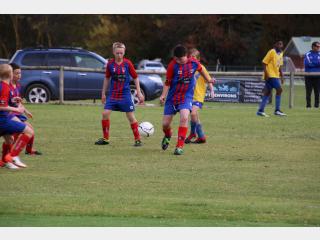 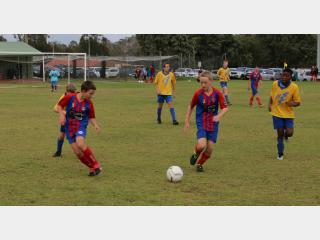