Home and visiting fans were again greeted by clear, sunny skies and premium conditions for fast football when Woodside Warriors U12 Gold hosted Nairne Football Club for their Round 5 encounter.

Nairne were looking to get the monkey off their back this week after drawing their last two matches. And right from the outset they looked every chance of doing just that! The Nairne side is a well balanced unit that includes a scurry of speedy little nippers who can turn their opponent inside out, as well as a few bigguns who can kick the leather off it – all play with passion and integrity. It was the man-mountains who caught the eye of the home crowd and put the home players on high alert. To compete, the smaller home side would have to find every ounce of strength that they had and channel their energy into well-disciplined intensity. And that is exactly what they did. Nairne dominated field position for much of the first half, enabling them to create a number of half-chances. But the Warriors were continually in the right spot and their constant defensive press made sure that all shots were either hurried, or from out in the bleachers. But every time that they cleared the ball, the powerful Nairne defenders would send it back with interest, giving their forwards another chance at the net. This pattern dominated the entire first half and although Woodside created what was, perhaps, the best chance of the half from a well struck corner and a bobbling ball on the goal-line, the final shot was deflected by a Nairne defender and we went to the break at nil all.

The second half was extremely reminiscent of the first, but with the teams running in opposite directions. Eventually, legs began to tire and small gaps started to pop up in the Warriors defensive unit. This, coupled with a few clearances that went up the middle, created a few better scoring opportunities for the visitors. Eventually, they capitalised on one and put themselves in the box seat at 1 – 0 with about a quarter to go. But a one – nil lead is a precarious thing in football. And when you are trailing by a single goal, you know you are still in the hunt. Over the first four rounds, Woodside Warriors U12 Gold have shown a complete unwillingness to give-in, and to be down by a single kick, with a vocal home crowd urging them forward, they were not about to surrender this week either. After 59 minutes of the 60 minute encounter, Woodside made their final assault, driving the ball up the right wing. There, they were met by the Great Wall of Nairne, which was carefully designed to repel just such an attack. But the unselfish Woodside forwards, who knew they could not penetrate on their own, created a beautiful right-foot-cross-to-left-foot-shot combination to draw the game level. And though they sprinted back to get the game going and create another chance, the ref blew his whistle to draw the curtains on a tight and enthralling encounter. 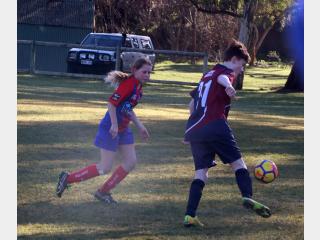 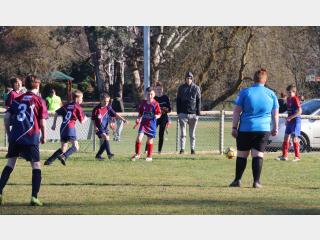